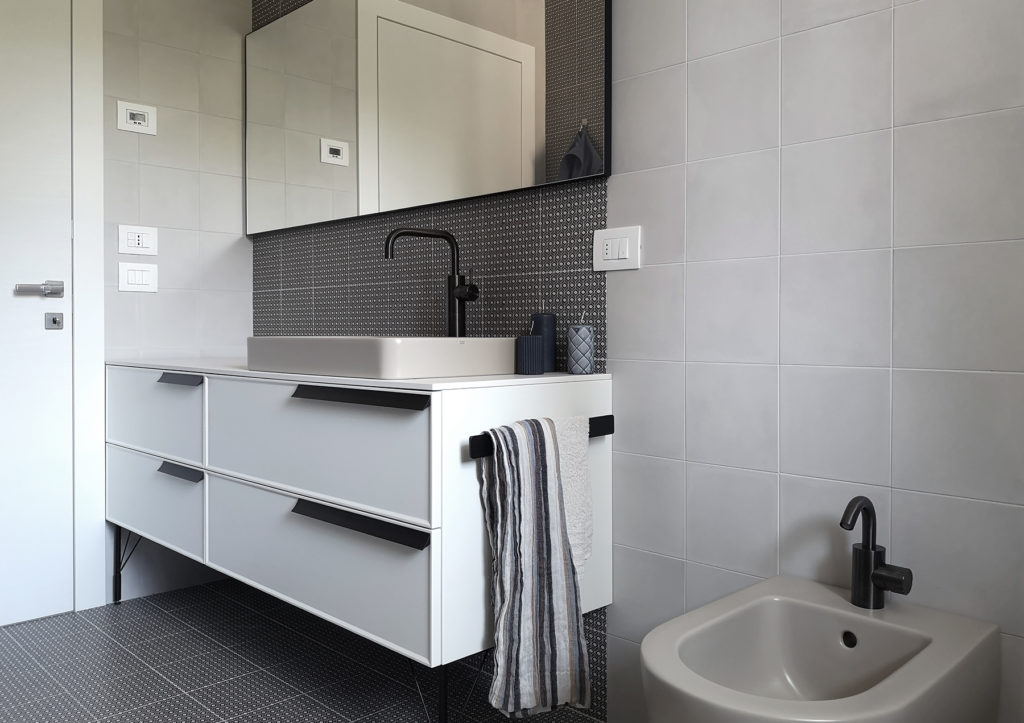 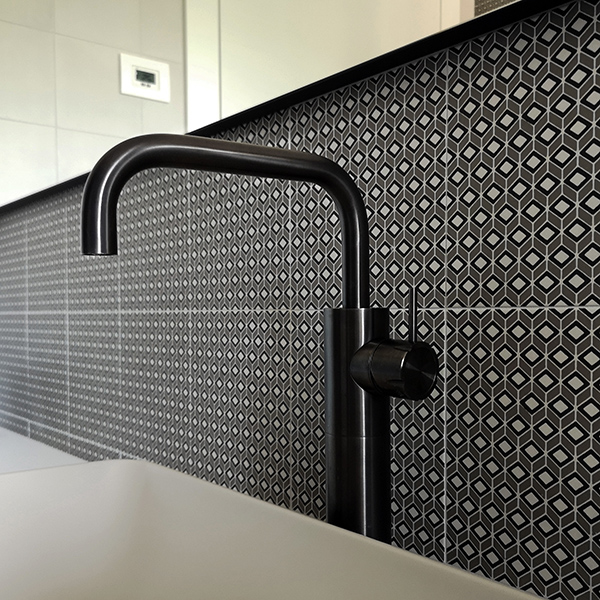 Stainless steel in Deep Grey finishing for a bathroom that plays on the contrast between clay colour and black metallic accents.

The taps, together with the accessories, are often chosen as the final furnishing element in a bathroom, giving it a minor aesthetic role, as if it were not able to change the design result.

Nothing could be more wrong. Especially if taps are considered as accessories (even if they are indispensable), their choice should approach as when selecting a belt or a jewellery to enhance an outfit.

I take a step back to the reasons that led me to furnish my two bathrooms with Mina faucets. The first criterion of choice was material. In all decisions related to home project I focused on the practicality and ease of maintenance of the surfaces.

Stainless steel, as a resistant and hygienic material, needs no introduction in this regard. I have therefore married the philosophy of the company and inserted steel taps both in the two bathrooms and in the kitchen, I am sure that over time it will maintain its beauty. The second criterion was, as imaginable, aesthetic. The Synth collection – chosen for this bathroom and kitchen mixer – is minimalist, elegant and fits perfectly into any type of style, both modern and traditional.

Finally, I love the flexibility and customization possibilities offered by a brand like Mina, which takes care of every single project, meeting the customer’s needs in every way, even making small variations to its models.

For example, one of my requests was to insert coloured faucets. Among the offered options that could be combined with the design of this bathroom there was the Deep Grey, an anthracite with intense shades tending to dark bronze. I considered it right from the start, but I also wanted to consider a brighter alternative with a finishing like brass. For this reason, Mina developed a custom colouring, which was then baptized as
Velvet Gold: an intense, orangey, brilliant gold. The choice was tough. Both proposals responded to my tastes and to the latest trends in bathroom design. The winner went to Deep Grey, but if I had a third bathroom I’m sure I would have redesigned everything just to include the Velvet Gold finishing.

And now more technical aspects. The following elements have been added to the aforementioned bathroom:

The company’s production flexibility has satisfied a further specific request: the washbasin mixer normally has a simple handle, without lever, on the contrary it is present in the kitchen tap and I found it much more functional. In this case, the company was able to meet my needs by making an essential modification: they sent to me the kitchen mixer handle and I could easily mount it on the washbasin mixer.

These are small attentions, but they can be fundamental to satisfy a designer or a customer.

Finally, a note on the shower area composition: to the traditional diversion mode (which requires the installation of diverter to change the water outlet point) I preferred to install to different taps.

The thermostatic mixer has been associated with two separate valves, one to control the shower head and the other to control the hand shower (installed on a slide bar).

Support, slide bar and hand shower are also in stainless steel, like the other elements. I emphasize this because it is not always so.

The final result is of very high level: the Deep Grey finishing is able to enhance the entire furnishing project, giving it exclusivity and elegance.

The coordination also with accessories like WC hand spray and control plate, is the classic icing on the cake, that underlines the material and chromatic choices adding a final touch of style.

Observing this bathroom, one perceives the importance of the choice of taps. It should be designed from the beginning to emphasize the mood of the interior design and should be coordinated with furnishing and coverings.

For this project Simona | Besidebathoorms has chosen:

Webcopywriter and blogger of Besidebathrooms, she writes about bathroom furniture on her own and other web magazines, alongside writing for the web to interior design consultancy for the bathroom. She selected Mina’s stainless steel taps for her editorial and furnishing project B-Home.

www.besidebathrooms.com
Posted in projectBook.
Share
PreviousIDEABOOK: a new tool for designing with MINA
NextWOOD AND STEEL ALSO IN THE BATHROOM
Cart Close